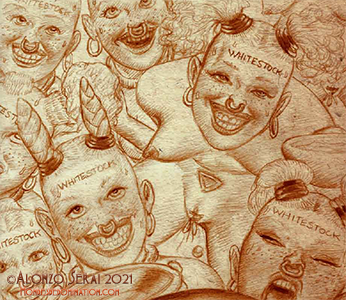 Zwanga takes a mate outside of Shazilar, though keeps in secret his old Shazilari lifestyle. Thirty years after his first steps in the Valley, he discovers that his enemy Maruk had always been many steps ahead of him... 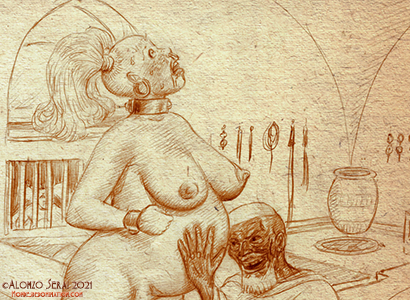 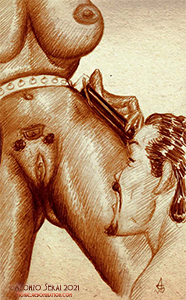 Amar knew that he would find Maruk in the last one, the one with the whitestocks … he only loved to take the long way! He was envying cattlemen. It was seen as a lower-class job, but in reality, Amar was finding it the most exciting occupation in the world. He relished the smell of these places; a mix of straw, animal manure, and the distinctive scent of the whites in heat, getting stronger and stronger as they were responding to his presence.

Along the path, the rosy buttocks were suddenly straightening up and shaking with the strain. A few liquid flows could be heard from white females who couldn’t control their bladder after the emotion originated by the proximity of the Caliph. Amar was never tired of looking at this wealth of little holes he owned, turning to him like sunflowers toward the sun. A eunuch was at work, shoving his cattle brush between the buttocks of a pet who was lifting up her backside by pushing on her legs, to make it easier for him.

Maruk was at the upper level, above the pits, sitting on his double wahiztok pouffe. He was checking the womb of a blonde who would deliver soon a precious litter of whelps, his right arm deeply shoved inside her body, his left hand feeling the swollen belly. She was rocking uncomfortably from one foot to another, strongly climaxing when the old breeder was involuntarily brushing a sensitive spot.

“Oh! yes,” Maruk said, “there is indeed a third one … ladiamanda, you are raising my hopes high!”

After your payment is completed, please wait until you are redirected back to our shop. Do not hit the back button. Thank you.